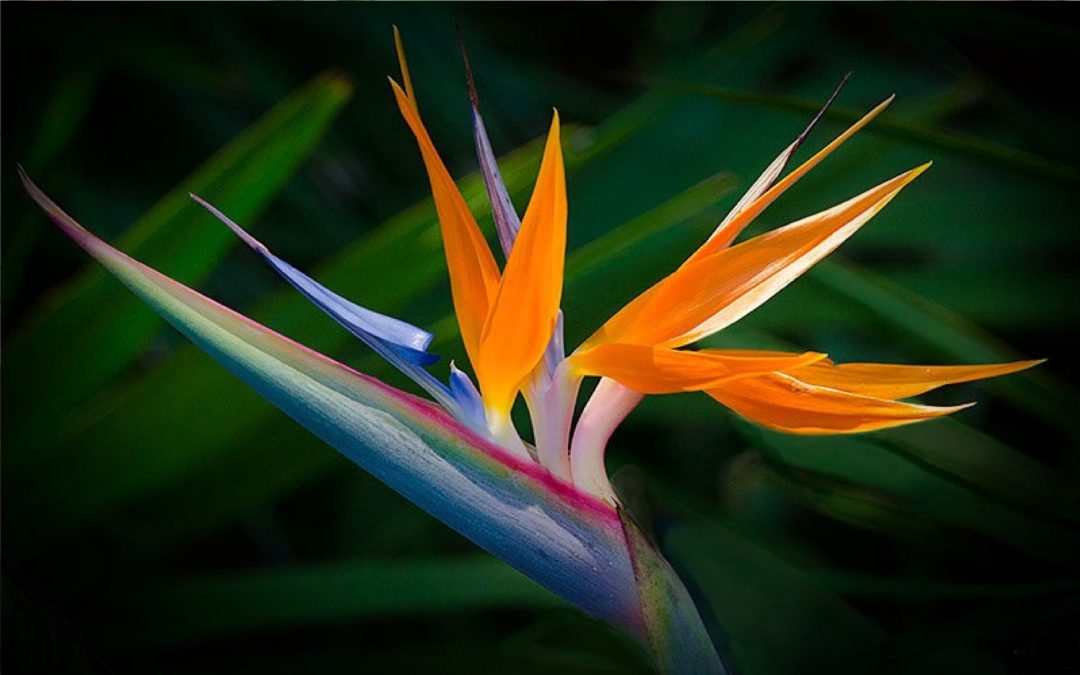 In nature, the birds of paradise plants (genus Strelitzia) are bushes and trees that grows up to 30 feet (10 m) high, native to South Africa. When cultivated, it’s often grown as an indoor foliage plant, or a bush outdoors in landscaping.

Bird of Paradise plants are slow growing, with huge leaves similar to a banana tree. They’re a lush evergreen perennial. Hailing originally from South Africa, they’ve made their way across the world as a popular landscaping and indoor accent plant. The flowers are large and striking, resembling an exotically colored bird.

Bird of paradise prefer to have better drainage, and slight drying out of the top few inches of soil between waterings. They don’t like soggy, moist soil for long periods. Root rot is a common condition that can occur if the roots don’t have enough drainage and access to air. Using a loose, well-draining growing medium can increase the roots’ abilities to breathe, and helps prevent negative micro-organism growth that can promote root rot.

Depending on the size of your plant, you can feel the soil with your fingers, or pick up the pot to judge the weight. Look for signs of stagnant water below the pot in the saucer. And make sure the pot is draining freely.

When watering it’s always a good idea to put enough water that some runs out the bottom of the pot. This is for 3 reasons:

The bird of paradise that’s most common is Strelitzia reginae. The binomial scientific name commemorates queen Charlotte of  Mecklenburg-Strelitz. It’s the official flower of Los Angeles, even though it’s native to South Africa.

A close relative, Strelitzia juncea has similar-shaped orange or yellow flowers, with purple and pink components. is also native to South-Africa, but had a different growth habit. It’s drought and frost resistant, and threatened as a species, in part because it’s highly sought after for decorative applications. The leaves are cylindrical, without a leaf blade, and grow as high as 6 feet (2 m).

This is the rarest of the three larger birds of paradise. You can find more info here.

They should be repotted every 2-3 years. More if growing vigorously.  A common sign that the plant needs to be repotted it curling leaves. Curling leaves can be due to a lot of causes, but being root-bound is a common one.

Ease the plant out of the pot and check if the roots are dense. This can also cause drainage problems, and birds of paradise like to have well aerated roots.

They’re tolerant of a range of soil types, but prefer nutrient-rich, well-draining soil. Use a soil high in perlite, and enriched with nutrient-rich organic matter, finished compost or fertilizer. Birds of paradise can handle moderate salt levels, but won’t thrive near direct ocean spray.

Keep the soil moist during the growing season. When the plant enters dormancy, you can let the top couple inches of soil dry out between watering.

Birds of paradise prefer a mildly acidic environment. This means a slightly lower than 7 pH.

Are the tips of your bird of paradise drying out and turning brown?

This is often caused by the bird of paradise being root bound. A root bound plant has a really high ratio of roots to growing medium, so when you water, less water is retained in the soil. Even though a plant has all those roots, the plant isn’t able to absorb as much water over time.

If the curling occurred right after a transplant, it’s probably just because of transplant shock. It should fix itself over the next week or two. If it doesn’t, consider easing the plant out of the pot and checking if it’s root-bound. Look for a dense matting of roots, and limited growing medium.

Cold temperatures, and too little water during new leaf growth can cause curling leaves. A lack of nutrients through poor soil, or poor nutrient availability caused by soil pH can also cause curling.

How much sun does a bird of paradise need?

Plants that are acclimated to indoor conditions will need to be gradually exposed to higher and higher light levels if you plan on moving them outside. A good intermediate step is to move them closer to your brightest window for a while, then move them outside to a location with partial shade.

If you’re in a colder climate, make sure the leaves aren’t touching a window. The plant will conduct heat through the window and could be damaged by the cold. Often there are air vents from the heating/HVAC system near windows. If these are blowing hot air this can dry out the leaves of your bird of paradise, so make sure plants are out of the direct airflow path.

Can bird of Paradise be grown indoors?

Bird of paradise isn’t tolerant of temperatures below 10 C, so depending on your climate it might NEED to be grown indoors! In Canada or many parts of Europe it just wouldn’t survive outdoors.

The plant does prefer bright light. In many parts of California it’s grown outside as a landscaping plant in full sunlight. If you’re moving a plant indoors, expect some time for it to acclimate. Ideally, gradually change the plant’s lighting level, it will take some time to fully acclimate.

South facing windows usually provide the most light. But your circumstanced may vary! If you don’t have bright direct light through a window consider artificial lighting. Birds of paradise likely won’t do well in medium to low lighting, it can be challenging to get them to bloom indoors.

How do I get my bird of paradise to bloom?

Bird of Paradise will bloom multiple times per year in ideal conditions. These conditions are usually met outside. Unfortunately, it can be challenging to get birds of paradise to bloom indoors.

One of the most common reasons birds of paradise won’t flower is that they don’t have enough light. Move your plant into the brightest light you have available. Likely a south-facing window. If it’s not getting direct sunlight for several hours per day, consider adding artificial light.