Home > Houseplants > Can you grow a dragon tree from a cutting?

Can you grow a dragon tree from a cutting? 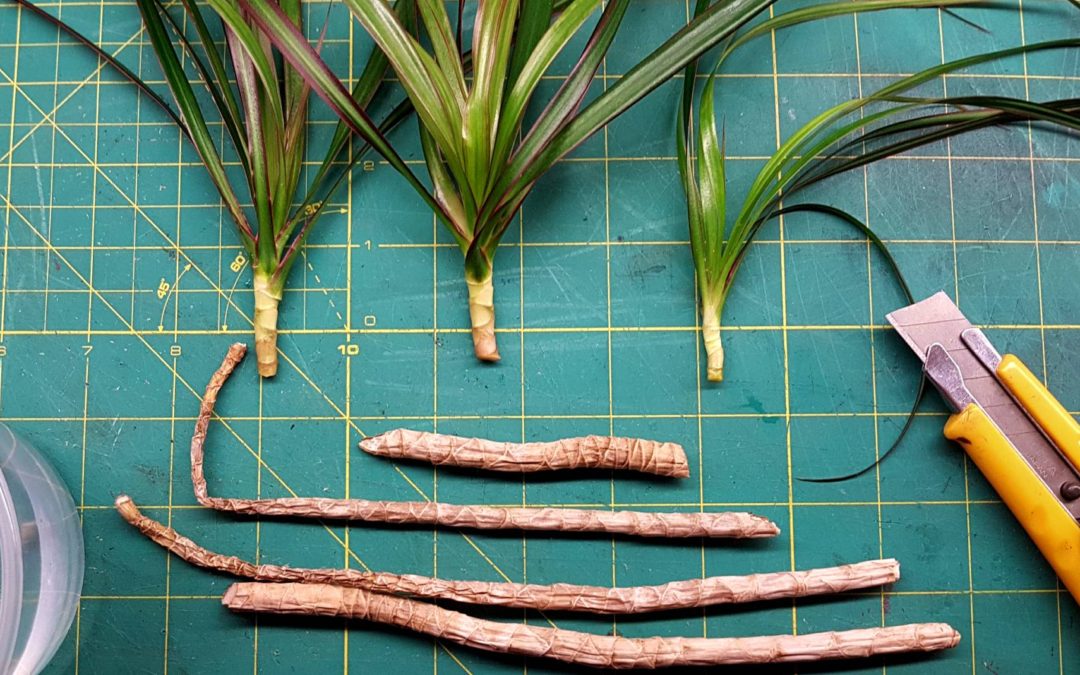 Commonly called a dragon tree, and sometimes a Madagascar dragon tree, the Dracaena marginata is a great houseplant, and very easy to grow. But how hard is it to propagate?

To propagate a Dracaena marginata (dragon tree): cut a length of stem 20 cm (8 inches) or longer, keep track of which end goes down. Place the cutting in moist soil or water.

The best time to take a cutting is when the plant is growing vigorously, likely in the spring or early summer. Use rooting hormone if you have it to accelerate root development. Use a sharp knife or cutters, sterilize first with rubbing alcohol, hydrogen peroxide, or vinegar. Keep soil moist, or change the water at least once per week if propagating hydroponically. Both ‘tops’ or rosettes, and stems without leaves can be propagated. Rosettes have a better chance of survival. Keep the cuttings in the brightest light you can, but out of direct sunlight.

Contents hide
1 How do you propagate Dracaena marginata?
2 If I cut a stem, will it re-grow on that stem only?
3 How long should stem cuttings be?
4 When is the best time to prune or take a cutting?
5 What is a rosette?
6 If you cut off a rosette, will it grow roots?
7 Air layering
8 Related Articles
9 My Favorite Houseplant Supplies and Tools

How do you propagate Dracaena marginata?

Dracaena can root directly in soil or water. The benefit of water is that your cutting will be less likely to dehydrate, and you can watch the roots grow. But new roots become accustomed to the water and have to re-adapt when you place them into the soil. 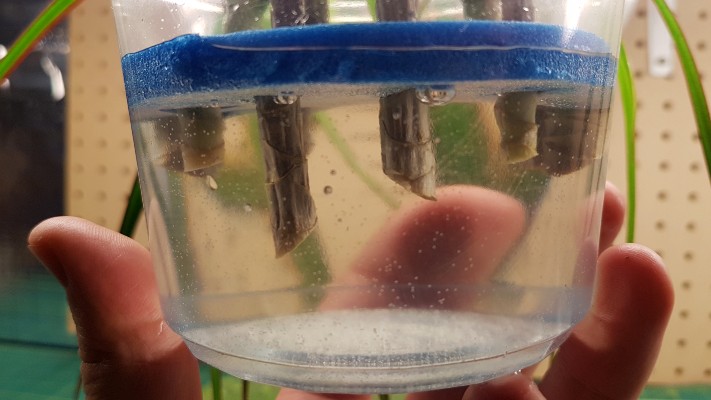 The benefit of soil is that any roots that develop are perfectly adapted to the growing medium. Soil needs to be kept moist, otherwise, the cutting and young roots can dry out and abort.

Cut with the sharpest tool you have. Utility knives, pruning shears, sturdy scissors, or a sharp chef’s knife should all work. Clean your tools with rubbing alcohol, hydrogen peroxide, or bleach. This will help prevent the introduction of microorganisms to the open cut. 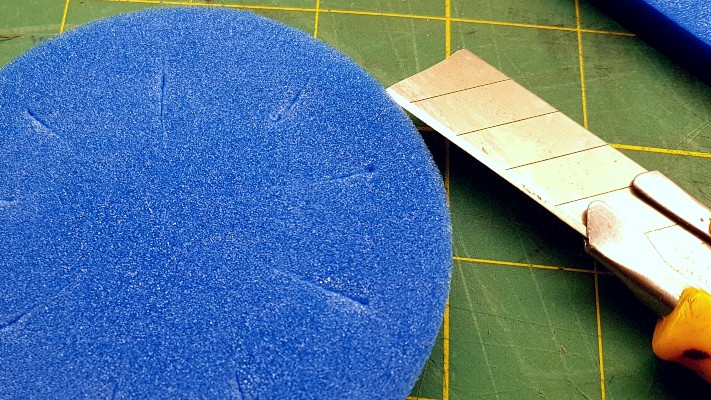 When rooting in water, I cut a little float out of closed cell foam. I cut a circle, then a slit for each cutting.

Change the water at least once per week, ideally twice. This will prevent bacteria and fungus from building up in the water. I like to put a small splash of hydrogen peroxide in the water. I find it doesn’t hurt the propagation process and keeps the water fresher longer.

A bit of hydrogen peroxide also keeps cut flowers fresh way longer!
Keep the cuttings in the brightest indirect light you have. Avoid low lighting, and avoid direct sunlight. Too much light and the plant won’t be able to keep up. It’s in a weakened state with no roots, so milder conditions give it a better chance.

It’s normal for the lower leaves on the cutting to turn yellow and fall off. Expect some of this. The plant is conserving energy, and dropping leaves.

Roots should start to emerge in around 10 days, but don’t be discouraged if it takes longer.

If I cut a stem, will it re-grow on that stem only?

Yes. There seems to be some mechanism where the plant detects the damage (from you or I severing the stem), and then new growth pops up nearby. I’m certainly no biochemist, so take this with a grain of salt, but plants some pretty cool mechanisms for detecting damage:

How long should stem cuttings be?

At least 20 cm. I’ve tried many times to use shorter sections but always failed. The upper nodes are where the leaves will begin to emerge. The nodes will start to swell, and eventually leaves will appear.

Lower on the cutting, the nodes will develop little nubs, and eventually roots. The roots often don’t emerge right from the end of the cutting, it seems to die back a little bit. I suspect this is part of the reason that a longer cutting has a better chance of success.

Another reason for longer cuttings working better is that a longer cutting stores more energy. A plant without leaves and roots isn’t able to collect very much energy. There could be a slight bit of photosynthesis happening in the bark.

Otherwise, the cutting needs to use internal energy to grow new leaves and roots. So a longer cutting has more energy. There must be a minimum length for each plant that it needs to generate at least 1 new leaf and some roots. In Dracaena marginata, the length is somewhere under 20 cm in average indoor conditions. I’d expect temperature, air humidity, pH, and minerals in your water to have some effect as well.

But, the largest factor is probably the condition of the plant before you took the cutting. Was it vigorously growing? Or is the cutting a last-ditch attempt to breathe life into a plant dying from root rot?

When is the best time to prune or take a cutting?

Pruning should be done in the spring or early summer. The plant will be entering a vigorous growth period and recover much quicker. The cutting will also have more energy in it, giving it a better chance of success.

After cutting, seal the old plant’s stump with grafting wax. If you don’t have grafting wax, candle wax works well enough. You can cut a piece off the bottom of a candle, heat it until it just melts, and brush or wipe it onto the stump. Don’t get it too hot or it will damage the living tissue in the cut end.

What is a rosette?

A rosette is the leafy head of the dracaena marginata plant. It’s the top, where the leaves are. The rosette is where the majority of the active vegetative growth is occurring. Dragon trees can have multiple stems and multiple rosettes.

Pruning can increase the number of rosettes. A cut stem often regrows 2 or more rosettes, which changes the look and density of the plant’s leaves. 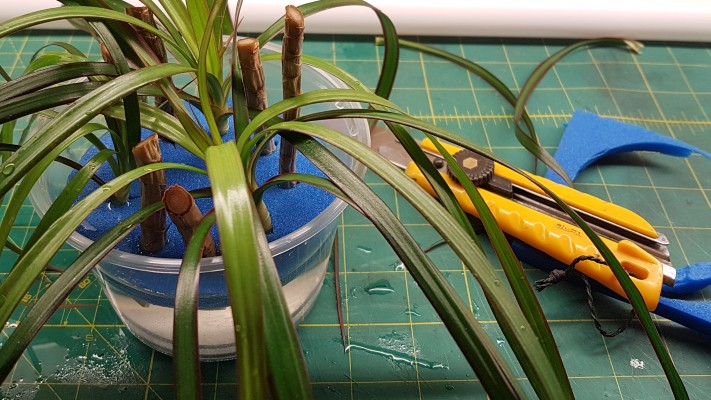 This photo shows a combination of cuttings with rosettes (with leaves) and without. Fingers crossed they all make it.

If you cut off a rosette, will it grow roots?

Liquid rooting hormone is better than powdered because it also does a bit of sealing for the cut end. This helps prevent microorganisms from getting a foothold and decaying the cutting.

After applying the hormone (or right after making the cutting if you don’t have hormone) place the cutting into room temperature water. Too hot or too cold water can shock the plant and potentially damage the tissue. 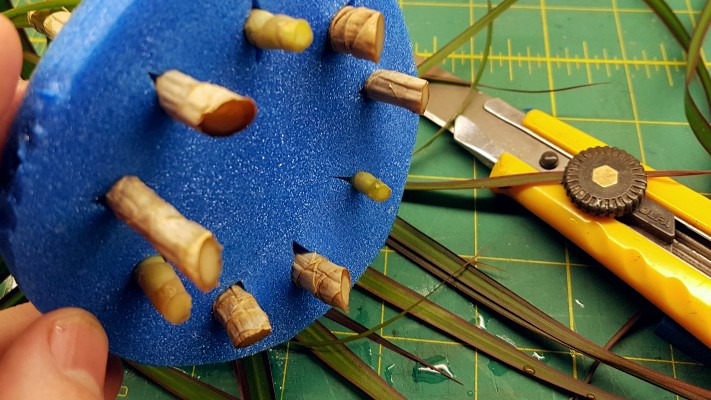 Cutting ends ready for rooting hormone. remember to keep track of which end is up.

Take a cutting with at least 20 cm of stem below the rosette. This will give the plant a larger store of energy to generate roots with, and more water reserves so it won’t dehydrate as easily. Sometimes with other plants, when there are way more leaves than stems on a cutting, it can dehydrate quicker.

Air layering is a very safe way to do propagation. The basic principle behind air layering is to create a microclimate that promotes root growth on a stem, BEFORE making the cutting. The roots grow before the cutting is removed from the original plant. This is often done by increasing the moisture, humidity, and sometimes hormones and nutrients in contact with a section of the stem.

Sometimes air layering involves wounding the stem, to encourage the roots to grow at that location. I haven’t experimented with air layering very much, leave a comment and let me know if you have.

My Favorite Houseplant Supplies and Tools

Thank you for reading this article. I hope you found it helpful as you nurture your houseplants and bring more green into your life. Here are some houseplant products I use that I thought might help you too. These are affiliate links, so if you decide to use any of them I’ll earn a commission at no cost to you. Think of it as buying me a cup of coffee!

Grow-lights: These plant spectrum grow lights drop into regular light sockets. This means your can turn any lamp or fixture you already have into a grow light. If you live in the North, or don’t have enough space near windows these can really perk up your plants.

Plant Food: I really like this indoor plant food (fertilizer). It’s nothing fancy, and it’s not organic, but it gets the job done. It’s popular for a reason. Has a nice spout so you don’t have to worry about losing the lid, or knocking it over and spilling it everywhere . If you think you’re likely to forget to fertilize regularly, plant food spikes are a great alternative. 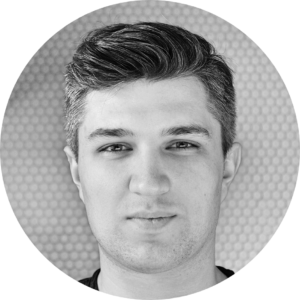 Microgreen articles as soon as they're published.