The Best Soil for Microgreens 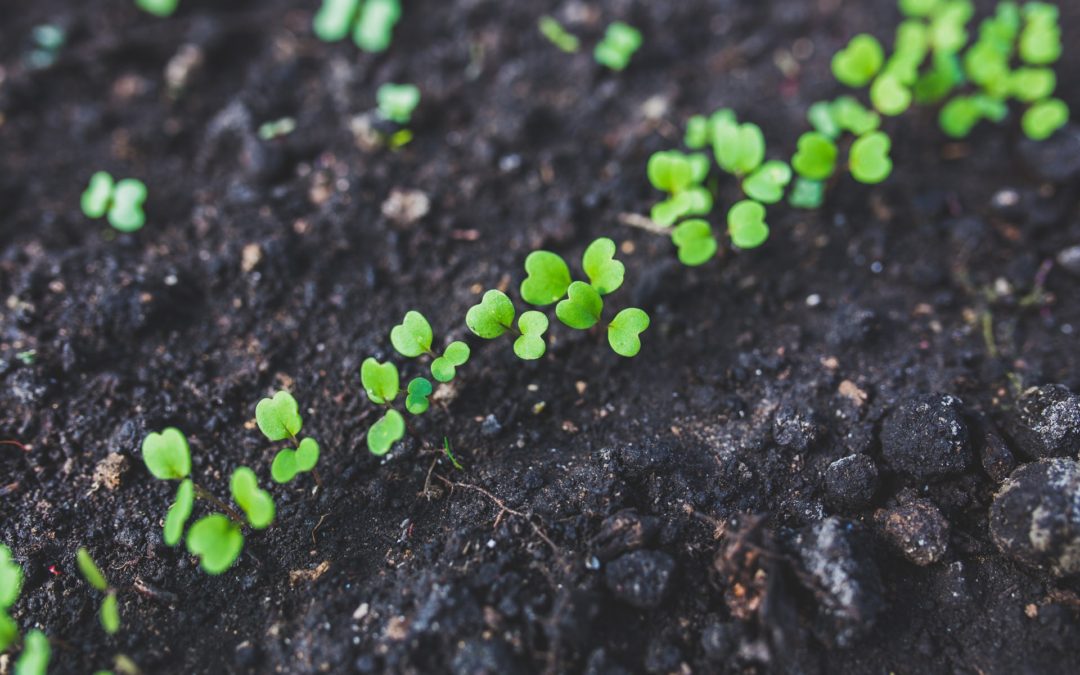 I’ve personally tried growing microgreens in everything I could get my hands on, and some things definitely work better (seed starting mix, potting soil) than others (peat moss, coffee grounds). Microgreens are incredibly forgiving of what you grow them in. But there is a growing medium that I’ve had the most success with when growing microgreens:

The best soil for microgreens is a mixture of 20% perlite and 80% organic materials (including peat moss or coconut coir for water retention, and pasteurized compost for nutrients.)

This is often sold as “seed starting mix, or potting soil”.

Often limestone or other additives are included to balance the pH and increase wettability, but they’re not critical.

There’s a lot to consider when choosing (or mixing your own) soil for microgreens. Keep it in the back of your head that almost anything will work, and you can have a lot of fun with it. Unlike a lot of plants that need sandier low-nutrient soil (like cacti and succulents), or rich water retentive soil (like tropical houseplants), microgreens will grow in almost anything.

Here are a few tips and tricks I picked up along the way while doing research for choosing the best microgreen soil. In no particular order:

Contents hide
1 Learn Each Soil Component and its Impact
2 Consider Nutrient Content
3 Think about water retention
4 Consider the Particle Sizes
5 Roots Breathe: Make Sure your Soil has Aeration
6 Make sure it drains
7 Tailor the Soil to the Container
8 Use Soilless Mixes if Insects are a Problem
9 Look at What’s being Used by Others
9.1 Microveggy
9.2 Curtis Stone Urban Farmer
9.3 Bootstrap Farmer
9.4 Homemicrogreens
10 Mold Problems?
11 Compare the benefits of Soil vs Hydroponic Grow Mats
12 Conclusion

Learn Each Soil Component and its Impact

But just because you can get away with less nutrients, doesn’t mean you need to.

A lot of microgreen growers find growing in soil to be more natural, and find that the flavor is fuller with soil. More nutrients also make the microgreens grow quicker.

If you do decide to go the hydroponic route using a growing mat, you’ll be on the low end of the nutrient spectrum. There are many hydroponic nutrients available out there. They bring a lot of their own energy and nutrients with them in their seeds. I would err on the side of less concentrated for the young seeds. And you can always experiment with adding a (carefully measured) splash of fulvic or humic acid to boost the nutrient profile.

Microgreen roots need to breathe, but they also can’t dry out. When you’re choosing a soil you’ll want to consider how much water it can hold. This is influenced by what the soil make-up is.

Water retention is also impacted by how much soil you have. If you’re growing with 1” or soil vs 2”, the 1” tray will dry out quicker. But you can always adjust your water schedule to accommodate this. Ultimately it’s a trade-off between soil cost, watering more often, and how much soil you’re comfortable using for each tray (and composting afterwards).

Some soil are coarser than others! And some clump.

Clumpy soils can be a problem for even seed germination. If microgreen seeds fall in-between the clumps, they’ll get more moisture, and less light, and germinate differently than the ones on top. It will also make harvesting harder if the plants are growing at different heights.

You can press the clumps down and break them up in the tray, or you can process the soil a little bit ahead of time. Think about Sifting your Soil.

Sifting is the process of forcing your soil through a mesh or screen. Usually 3/8” or ½”, you can buy them pre-made, or make your own with chicken wire or whatever you can source locally. It’s a way to remove debris and improve your soil consistency.

Roots Breathe: Make Sure your Soil has Aeration

When you’re choosing a soil to grow in, remember that roots don’t just need water and nutrients, they need air too! You can drown microgreens if their roots can’t breathe.

Roots need oxygen. One of the main functions of roots is to exchange gases with soil. Different plants have different tolerances for aeration (think of seaweed), but they all need some oxygen. If microgreen roots can’t breathe, they’ll begin to drown and die.

Low aeration soil, especially if it’s waterlogged, is also an ideal environment for microbial growth. Mold, bacteria, and other pathogens thrive in anaerobic (low oxygen) environments. Don’t give them a chance.

Make sure it drains

Hand-in-hand with aeration is drainage. Soil that has poor drainage isn’t a huge problem for microgreens as long as you don’t over-water. But you do need SOME drainage. Almost any soil you buy at the store in bags will have enough drainage for microgreens.

If you’re mixing your own soils, avoid soils that are really high in sand, or in clays. Drainage isn’t really a problem if you’re growing indoors, but if you’re growing microgreens outdoors in your yard, in a field, or in a greenhouse, you might be dealing with more compact soils with drainage problems.

Tailor the Soil to the Container

A container that doesn’t have drainage might benefit from a different soil than one that does. If you’re growing directly in solid greenhouse trays consider using a soil with higher drainage (more vermiculite or perlite) than if you’re growing in a perforated tray.

Also if you’re growing in a thinner container, something 1” thick or less, you’ll want a finer grained soil. Some soils are clumpy and have chunks of twigs. You’ll want to sift them through a mesh or chicken wire to break up the clumps and get the debris out, or use a soil that comes finer from the supplier.

Use Soilless Mixes if Insects are a Problem

Soilless mixes often look like soil, but they lack the microbiome (the diverse microorganism life that’s typical of soil). They can be a good answer if you’ve been having mold problems, or if you’re having trouble tracking down soil that doesn’t come with insect eggs and larva in it.

In some areas, for whatever reason, the garden supply places have big problems with insects. Look for bags that are stored indoors, because even if the soil is pretty sterile at the source, if it’s stored outdoors, and the bags inevitably get a little bit damaged and punctured, critters will make their way in.

With soilless mixes, there’s little to no food for insects to thrive on, so they’re less likely to move in.

Look at What’s being Used by Others

I took a bit of an inventory of what’s being used across the web and here’s what I was able to find:

This blog recommends making up your own blend using:

Which after doing a bit of digging is around Is mostly sphagnum peat moss, with 20% Vermiculite, and a few other additives. It’s low on drainage, with fine particle size, and high water retention. It’s not organic.

“Grow medium can be compost, a soil mix or even just a 50/50 blend of perlite & vermiculite.” – Source

The results? All three worked great.

So what’s the takeaway here? Almost anything will work.

If you have mold problems you’ll want to take a good look at your soil. Some soil, especially if it’s been stored outside, in the rain, in standing water can pick up a good population of mold.

The key to preventing mold, is starting with clean soil, and then making the conditions unfavorable for mold growth. Make sure the soil isn’t waterlogged, and that humidity isn’t too high in the area where the microgreens are growing. Fans, dehumidifiers, lowering seeding density, and watering less frequently are all ways to decrease humidity.

Temperature is another factor in microbe growth. If your temperatures are too warm, fungi and other microorganisms will grow at an accelerated rate, and can overtake your microgreens and lead to damping-off, visible mold, and poor quality product that spoils quickly.

Mold grows from spores that make their way into the soil. But even the most sterile soil can grow mold, because the spores are everywhere, and travel through the air. They’re so tiny the naked eye can’t detect them a lot of the time.

Compare the benefits of Soil vs Hydroponic Grow Mats

Soil usually grow more robustly and with less fuss than hydroponics, but it’s a lot messier. The choice isn’t just whether one grows better than the other.

Hydroponics can be done at different price points, some grow mats cost over $1 per tray, but you can also get away with burlap at one quarter of that price. The big difference is how much moisture the substrate can hold, and the texture. Larger seeds seem to do better on burlap than smaller ones.

Smaller seeds can fall through the texture of a loose hydroponic grow medium. They can also fall deeper into soil, so a fine hydroponic pad, made from wood fiber, hemp, or jute can be a good choice.

Wow, you actually made it all the way down here!

If you want the quick answer: you can grow microgreens in almost any soil. Pick up a potting mix from your local garden supply shop and you probably won’t be disappointed.

If you’re concerned about fruit flies, fungus gnats, and mold problems, consider ordering soil online. You can check out the soil I’d recommend starting with here: