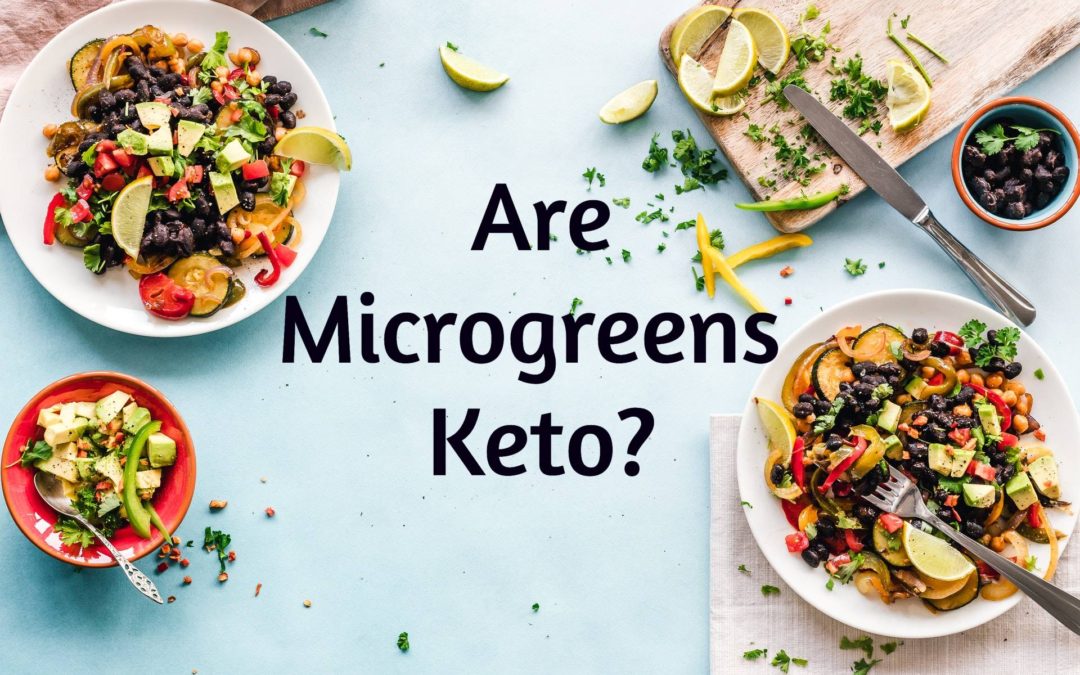 Are microgreens keto friendly? Microgreens are low in carbs (2 % – 5% fresh weight) and high in protein and fat for produce, making them great additions to ketogenic diets. Microgreens are more ketogenic than sprouts because you don’t eat the roots or beans which are large stores of starch and carbohydrates.

How many carbs are in microgreens?

So, let’s get into a bit more detail, how many carbs are in different microgreens?

Microgreens, like other fresh leafy greens are low in carbohydrates generally.

Sweeter microgreens are higher in sugars, that’s where the sweet taste comes from! And sugar is a carbohydrate.

Microgreens are often 2-4% carbohydrates by weight. And 100g of microgreens is actually quite a lot. So they’re pretty low in carbs. A 100g bowl full, will have 2 – 4 grams of carbs. Source.

Best Microgreens for a keto diet

The less sweet a microgreen is, the better it is for a ketogenic diet, all other factors equal.

Microgreens grown from beans can also be keto friendly (along with sprouts), but they are usually a bit higher in carbohydrates than other microgreens, especially when they’re young, or when you’re consuming them as sprouts (eating the beans/roots).

Microgreens to avoid on a keto diet

Avoid sweeter microgreens, and consider the level of maturity (more mature could be lower in sugars for some species/varieties, to a point).

The sweeter microgreens are:

And slightly sweet microgreens include:

Microgreens also change as they get more mature. Young seeds, peas, and beans that are grown into microgreens have a certain nutrient profile (% of carbs, fiber, protein and fat). And it changes as the microgreens grow.

As the seed germinates, it creates enzymes and sugar begins to move around the plant to fuel growth.

Much of the nutrients are stored in the cotyledons as they develop.

Microgreens are often less-sweet as they mature past the cotyledon stage and start to grow true-leaves. This could be evidence for less sugar and less carbohydrate content as the greens mature.

But the flavor is also more bitter from the additional chlorophylls (chlorophylls are bitter in taste). This bitterness might mask some of the sweetness.

What is a ketogenic diet?

A ketogenic diet is high in fat, moderate in protein, and really low in carbs. The total carbohydrate allowed in a day is generally 20 to 30 grams. It’s similar to the Atkins diet, and other low-carb diets.

The idea is to reduce your carbohydrate intake, and increase your fat intake, to the point where your body enters Ketosis.

Ketosis is essentially re-orienting your metabolism to efficiently and preferentially run on fats and ketones for energy.

Typically you’ll see a drastic reduction in blood sugar levels (because a lot of your body’s processes are now using ketones for fuel), and lower insulin levels (your body’s creation of insulin is related to blood sugar).

Ketogenic diets have a lot of benefits if you give up the carbs! Ketogenic diets can help you lose weight, improve health, and may even help diabetes, epilepsy, cancer, and Alzerimer’s, but research is ongoing. Source.

An important thing to remember is that not all carbs are created equal, and our body doesn’t treat all carbs the same.

Some carbohydrates our body doesn’t digest and extract any nutrients from. These carbohydrates are lumped into a category called Fiber. Fiber has a number of health benefits, and is actually really important for a ketogenic diet. Ketogenic diets need special attention to consuming more Fiber, which paradoxically means more carbohydrates.

Or looking at it another way:

So take a closer look at nutrition labels if you’re on a ketogenic diet, the details matter.

Broccoli sprouts can definitely fit into a keto diet. Broccoli sprouts, like many other sprouts and microgreens are low in carbohydrates compared to a lot of mature vegetables and other foods.

Let’s look at an example of a superfood powder to figure this out together:

This product weighs about 11 grams for a 1 scoop serving (dry).

In this serving there are 3 grams of carbohydrates, which we can find on the supplement Facts/nutrition label.

So we’re looking at 27% carbohydrates, which is actually really high! But, that’s dry weight. When you’re eating vegetables, the majority of the weight is from water.

And the other thing to consider is what ingredients are in your microgreens powder? In this case it’s a mixture of microgreens, berries, and other ingredients.

Berries are very high in carbohydrates.

So, keep an eye on the ingredients, and check the nutrition label/supplements facts before you reach for your microgreens powder if you’re on a ketogenic diet.

Wasabi has 31g of carbs out of 130g (fresh weight) and in that, it contains 90g of water. That means it’s about 22% carbs by weight fresh, or 78% dry. So it’s definitely on the higher carb end of the spectrum. But, luckily you’re not going to eat very much of it because it’s so spicy!

You’ll probably consume a pea-shaped amount, up to a large spoonful of about 10 grams. This could be 5-10g of your daily carb intake, so you do want to limit the amount you consume somewhat.

The other important thing to consider is that you want the limited carbs in your ketogenic diet to add as much flavor and enjoyment as possible. So a few carbs in wasabi, if you love wasabi, are carbs well-spent.

But remember, even a spoonful of sugar can make its way into a ketogenic diet, but you’ll have to give up those carbohydrates elsewhere in your diet. It’s the total consumption per day that makes your diet ketogenic, not the carbohydrate content in any one thing you eat (unless that one thing has more carbs than your total carbohydrate budget for the day).