Home > Houseplants > Do you water orchids from the top or bottom?

Do you water orchids from the top or bottom? 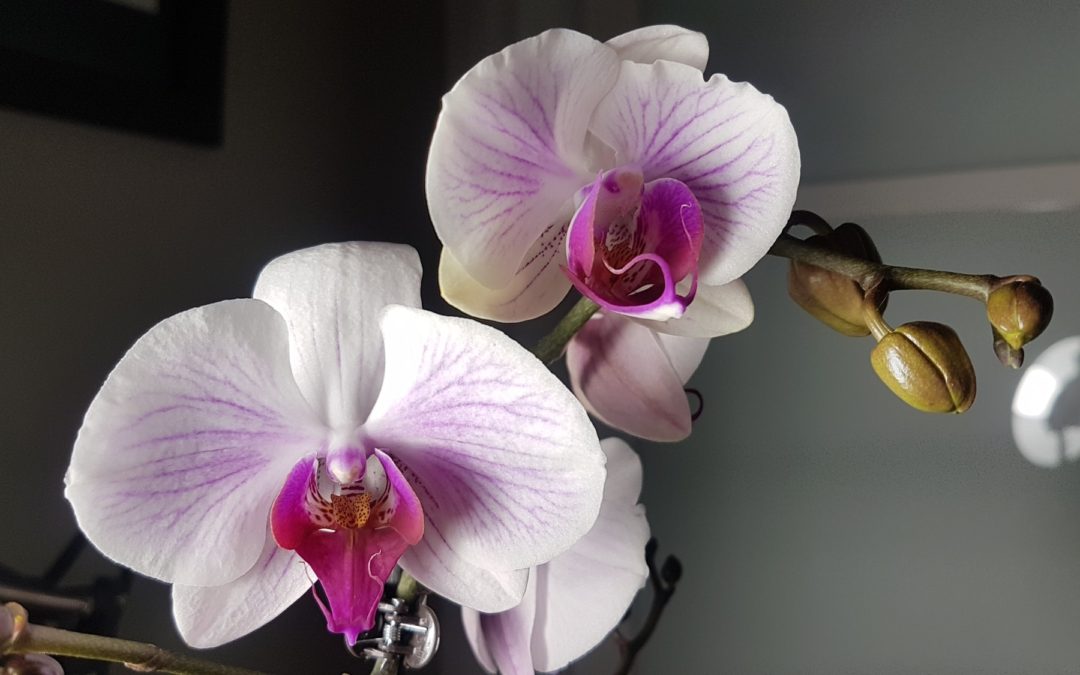 Watering orchids is easier than you think. This first bolded paragraph will give you the summary for the most common orchids (phalaenopsis) that you’ll encounter in nurseries and grocery stores. The rest of the article will get into general principles.

To water orchids, consider their species/cultivar, and their natural environment. Most phalaenopsis orchids are epiphytes (live in trees) where their roots have good ventilation and drainage. Soak orchid roots completely for 15 minutes (simulate rain), and rinse water through the growing medium to prevent mineral and fertilizer buildup. Use lukewarm water, avoid ice cubes. Fertilize weakly (1/4 strength) every watering. Wait until roots are grey/silver and shrivelled before watering again. Don’t water if roots are green and firm.

Contents hide
1 Should orchids be watered from the top or bottom?
2 How to water an indoor orchid in moss?
3 Can you use ice cubes to water orchids?
4 How much water do you give an orchid plant?
5 How long can orchids go without water?
6 Avoid cross-contamination
7 How to water warm growing Phalaenopsis
8 Fertilizing orchids
9 How do you fix an overwatered orchid?

Should orchids be watered from the top or bottom? 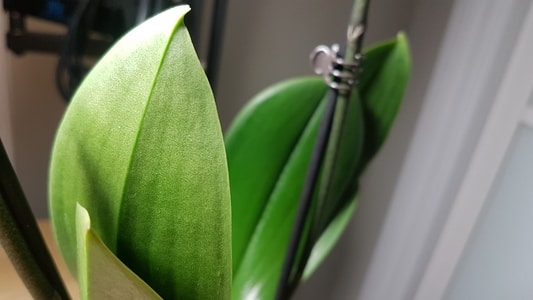 There’s a lot of material out there that tells you not to water orchids from above, and that water trapped in the leaves and crown can cause rot. If you ask me, this doesn’t make any sense, at least not in most cases.

Watering from above is fine!

Let water get between the leaves!

The thought process (that I disagree with, especially in low humidity environments), is that trapped water will cause leaves and the crown to rot. I think this advice must have come from large commercial greenhouses, or somewhere other than home growers. I’ve had good success completely drenching orchids.

If you’re flushing orchids with lots of water, there won’t be any bacteria, fertilizer, or fungus building up on the vegetative parts, so you shouldn’t have to worry. And think about what happens in nature, in dense humid forests where a lot of indoor potted orchids originate: there’s rain! There’s tons of rain!

Orchids come from all over, but a lot of them evolved in environments where they’re constantly being blasted from above with water. So, to think this is going to cause them problems if you get a bit of water between leaves, doesn’t make sense to me. I’d be curious to hear your experience on this. Also, I’m in a very dry climate, so there may be less micro-organisms, and orchids might dry out quicker here than where you are.

How to water an indoor orchid in moss?

To water orchids growing in moss it’s extra imperative to ensure the orchid isn’t being over-watered, as moss holds more moisture than bark.

Moss will hold a lot more water that other orchid mediums. If your orchid is potted in peat moss it could be a good idea to report and mix the moss with bark, or use bark exclusively. Peat moss holds a lot of moisture, breaks down quickly, and doesn’t allow good drainage and aeration for orchid roots. I would avoid peat moss if possible.

Can you use ice cubes to water orchids?

You can, and some commercial orchid growers recommend it, here’s an example from the grocery store. 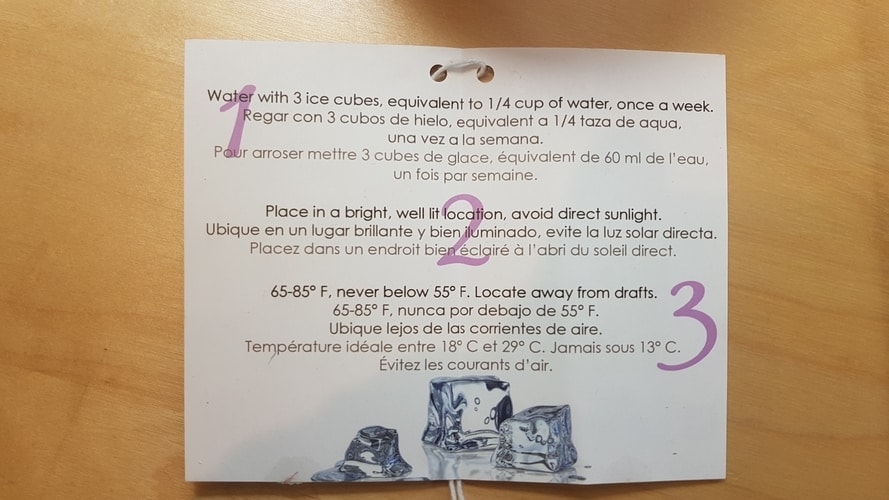 I think the main benefit of using ice cubes is that it prevents over watering. Over-watering Is one of the main ways houseplants, and orchids in particular, die. But it’s usually from watering too often, and not from too much water.

But there are some big problems with using ice cubes. Most orchids, especially warm growing orchids, are used to room temperature or warmer rain. They’re not used to ice water. Cold water can damage orchid tissue and slow growth.

Another problem is if you have hard tap water like I do. If you only put a few ice cubes on top of the bark every so often, the minerals in the water (the hardness) will precipitate, and build up over time in the bark or growing medium. Without enough water to flush out the minerals, the orchid will absorb all the water, and you’ll get a calcium and other mineral crust that builds up. The high mineral content can damage roots and slow growth as well.

So, my advice is to avoid ice cubes. There is a lesson in ice cubes: don’t over-water. But do this by increasing the amount of water, and decreasing the frequency. I completely drench my orchids, give the roots plenty of drainage and holes in the pot for airflow, and then watch for shrivelled silver roots. Then water again.

How much water do you give an orchid plant?

Give orchids tons of water. They like to be soaked. Be careful about how often to water. Look at the roots, if they’re silvery or grey, you’re safe to water. If you’re not sure if you need to water, wait a few more days. Water with lukewarm water. Avoid ice cubes, avoid warm or cold water.

Water hardness is often cautioned against, but I’ve had great success watering with my local water which is really hard. Another prolific local grower (here but not) also uses exclusively hard tap water with great results. The real problem with watering with hard water, is when you don’t add enough water to flush out the pot.

Water so much that the rooting medium is rinsed out, this will prevent buildup of the minerals in hard water. Some people advise a flush with pure water (distilled, reverse osmosis, or rain water). I’ve found it unnecessary, tap water works fine and I have really hard water.

How long can orchids go without water? 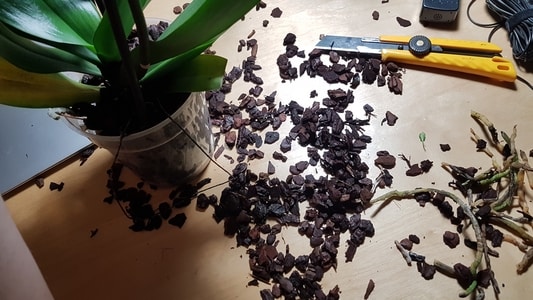 Don’t let water move from one plant on to another. And definitely don’t use runoff from one pot to water another. If you water your orchids from the top, and let a healthy amount of water run through the soil and drain, make sure there aren’t any orchids underneath for the best prevention of disease spread.

Don’t repot plants from one pot to another without cleaning and sterilizing the pots. If the soil had high populations of micro-organisms or insect hitchhikers, they’ll be spread to the new plant.

Touching leaves allow pests to spread, mealybugs are an insect that will crawl all over the place. If leaves from two plants are touching, insects from one plant have a good route to spread.

How to water warm growing Phalaenopsis

Phalaenopsis orchids are a popular and diverse group of orchids. Many are warm-growing, meaning they come from warmer climates, generally at lower elevations. These climates typically have fairly stable temperatures, so this is what these orchids expect. In nature they’re accustomed to consistent temperatures, and even light, and many bloom year-round when they’re in the right conditions. The blooms often have great fragrance, which can vary a lot between species and cultivars. The blooms can also have almost any color under the sun, except blue as far as I know.

Phalaenopsis orchids are epiphytic and typically grow attached to tree trunks. They need well-draining environments for their roots, bark chips are perfect for this. Some mixed will contain other ingredients, some common ones are sphagnum moss, charcoal, coconut husk. Avoid peat moss, peat moss is great at holding moisture, but doesn’t drain well.

Clear plastic pots are great because they can help you figure out how roots are doing, and can be a good signal for when to water. The roots can photosynthesize in a clear pot. You want your clear pot to have holes or slits in the side to help air movement and prevent anaerobic conditions in the bark and roots.

Many warm-growing phalaenopsis do well in temperatures over 25C (77 F). Growth can slow down and blooming can halt if temperatures are below 25C (77F) for some warm-growing species. Your grocery store orchids probably won’t have this problem. Here are a few key points:

In low humidity (24-45%) houses, it can be a good idea to add sphagnum moss (around 25%) in the mix, this will increase water retention. Low humidity air causes water to evaporate quicker. Another option is to add sphagnum as a cover or top dressing to keep roots moist. But keep in mind, many new orchid growers water too much, not too little, look to the roots for grey/silvery coloring.

If you need to, consider tailoring your growing medium to your watering frequency. If you’re watering once a week. Get a medium that will dry out quickly. If you travel more

Seasonally cool phals need to dry out because where they naturally grow the air is dryer during the winter. Dryness and cool air signals that spring is coming, so they start growing spikes so they’re ready in the summer. This preference for cool dry air is often due to the higher altitudes in their natural environments.

Set in stone recommendations don’t work: you need to consider your home’s lighting, latitude, watering frequency (how often you can physically do it).

If you really want to extend watering, you can use 10-50% sphagnum moss to hold moisture for up to a week, especially in northern and dryer climates. This can also help keep moisture levels more consistent over the week. But for me, if the orchid is healthy, I just use bark chips.

Use specialized orchid fertilizers. In spring use a high nitrogen fertilizer to promote leaves. In autumn or winter, or when blooming, use a higher phosphorus (middle number at least equal to Nitrogen and Potassium). In general phalaenopsis are heavy feeders, they can consume a lot of fertilizer compared to other orchids. But orchids still do well with dilute fertilizers overall, remember the epiphytic (tree dwelling) nature, they’re used to rain water which is relatively low in minerals and nutrients).

If you fertilize, make sure you flush out any water containing fertilizer from leaves and crown. Buildup of fertilizer residues can damage the plant cuticle (the protective film on leaves). Crystals can form when the water evaporates. If you spill fertilizer-containing water on the leaves, give the area a little splash of water to displace the fertilizer.

How do you fix an overwatered orchid?