Home > Microgreens > Eating > Are sprouts the same as microgreens? hint: no!

Are sprouts the same as microgreens? hint: no! 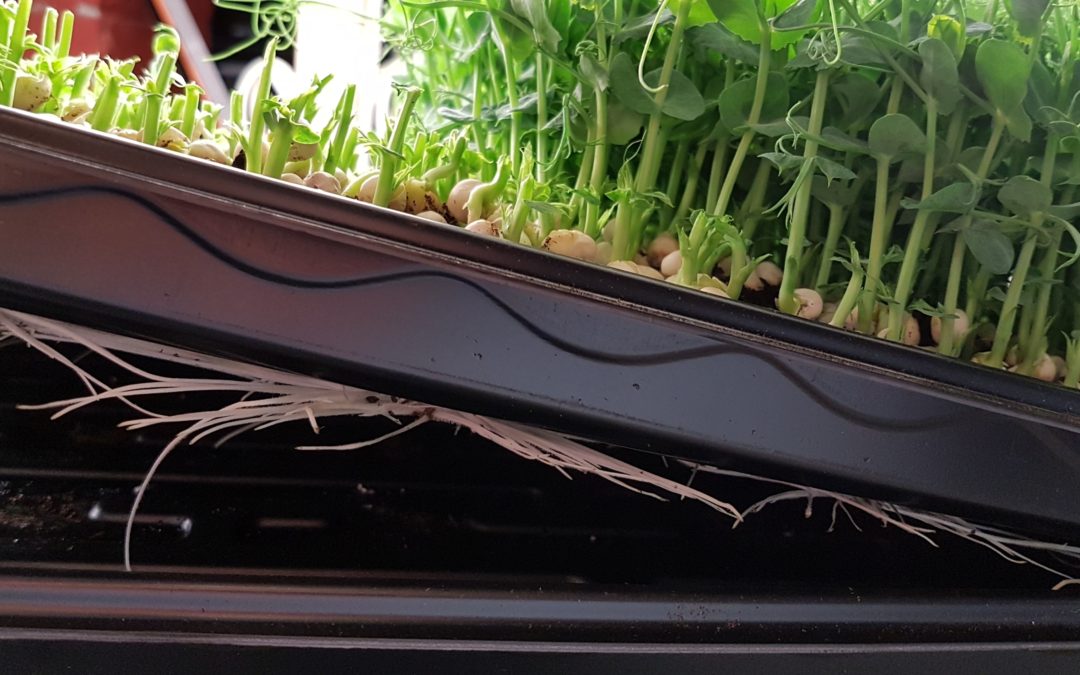 Are sprouts the same as microgreens?

Sprouts usually means the young shoots, with roots and seed. Sprouts are still white/yellow, or just starting to turn green, and are barely past germination, maybe a handful of days at most.

Microgreens are the same plant, but harvested after the seedlings have rooted, and started to photosynthesize and grow green vegetative growth. Both are young forms of plants packed with nutrition and flavor.

Both are packed with nutrition.

Growing sprouts and microgreens can be a great alternative to seeking out garden and spring mixes and young lettuce mixes at the grocery store.

Maybe you’re having trouble finding crisp fresh salad mix in the winter, or maybe you’re over all that packaging. It’s surprisingly simple to grow your own, and the cost is really low once you’re set up, give it a try!

How are sprouts grown?

The biggest difference between sprouts and microgreens is that sprouts are grown without soil, and you eat the whole thing! Roots and all!

Sprouts can be grown with a lot of methods, but there are a few key steps.

Hydrate the seeds so they germinate. The simplest way is to soak the seeds (for different lengths depending on the species/cultivar), and then rinse twice daily until the sprouts are as finished as you’d like. After each rinse its important to drain and leave the sprouts in a position so they’re not sitting in stagnant water. There is a lot more to perfecting this, but that’s the general idea.

One of the biggest challenges with sprouts is keeping them hydrated enough that they don’t dry out, but without growing mould or fungus.  Rinsing twice a day is an option, or some people mist, but misting can be a little riskier because you’re not flushing away any mould spores that are starting to grow. And even if you do a good job sterilizing the outside of your seeds, natural spores in the air can take hold.

How are microgreens grown? 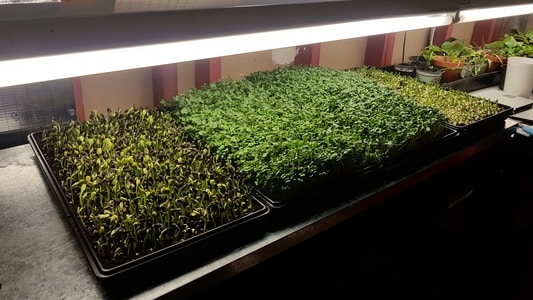 Microgreens are grown by taking high quality sprouting or microgreen seeds, soaking (depending on the species, definitely a yes for peas or sunflowers), planting in soil, coco coir, or another medium, germinating (often in the dark), and then growing for a few days to a week in light!

Harvest when they’re a 2-4 inches high (depending on taste) for pea microgreens, or right as the first true leaves are visible for most other microgreens. The first leaves that come out of the seeds are called cotyledons and have a mild taste. The first true leaves (they’ll look different from the cotyledons) are more packed with chlorophyll, and chlorophyll is slightly bitter.

Are you worried that the microgreens seem wasteful?

You’re throwing away the lower part of the plant and all that soil!

Right! But all those roots, and the lower stems add incredible organic matter to a compost pile. You can compost them in a compost pile or burry them right in your garden. You want to bury them at least half a foot down so critters don’t dig them up, and there’s a good barrier of soil to keep the decomposing microorganisms down and away from whatever you’re growing.

Can you eat microgreen roots? 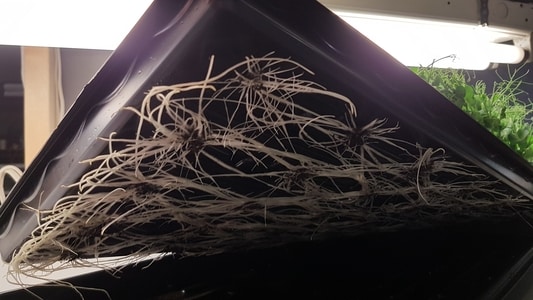 No it’s not a good idea to eat microgreen roots.

Microgreen roots are grown in soil (or another growing medium), and are really absorbent little things. Even the best well-composted soil that’s advertised as sterile is a hospitable environment for microorganisms. During the 1-2 weeks that you grow microgreens, other things are growing in the soil, and it’s really hard to separate the soil from the roots in a safe way.

They might not take-over, or be visible to the naked eye, but moulds, fungus, and other micro-organisms are spreading in the soil. The active soil micro-biome actually benefits plants through increasing nutrient availability, and breaking down organic matter. But it’s not well-suited for human consumption.

Microgreens can have very complex and tiny roots, and it’s really tough to wash and sanitize them once they’ve been grown in soil.

Do you eat the roots of sprouts?

For sprouts on the other hand, yes! You eat the whole thing. This is why it’s extra important to be rigorous and organized with your sprouting protocol! Follow the right steps and you’ll mitigate a lot of the risk.

Phases of Plant Maturity and Growth

Microgreens are not sprouts, and vice-versa.

Microgreens are more mature, often grown in soil, and you only eat the vegetative parts of the plant. Sprouts are barely germinated, and you eat the seed, initial vegetative growth, and the roots too.

Plants go through a number of stages, microgreens are an early stage in a plants growth.

Seeds are the little packets of genetics and energy that plants create to keep their genes alive. Seeds are alive, but dormant. The longest a seed has remained viable (able to grow) is almost 32,000 years! Seeds need certain conditions to germinate.

When seeds are exposed to the right combination of air, water, and temperature, they awaken. Proteins and enzymes are activated and the plan gets to work on growing the initial root and cotyledons (leaves). Once the plant has a preliminary root and is starting to grow a stem it’s a sprout!

The sprout is the initial growing plant, it has little cotyledons, a little root, and the remains of the seed. It may or may not be beginning to photosynthesize seriously. A lot of sprouts are mostly white and yellow. Sprouts are eaten whole, roots and all.

Before the plant fully matures, but after the cotyledon stage, the level of maturity is called baby greens. Note that in some areas there is overlap in the language between sprouts, microgreens, and baby greens. It’s not necessarily clear-cut.

Mature Plants. After the cotyledon seeds come the first true leaves. The plant continues to grow larger and more complex structures. It’s not a mature plant.

You have your priorities straight!

You’ve probably wondered about the nutritional content of microgreens vs sprouts. Microgreens are so much greener, but sprouts are even younger and more tender, so which is more nutritious?

In sprouts, they’re younger, but they’re also relatively self-contained from an energy perspective.

The major thing they absorb is water.

There is very little photosynthesis (young lighter colored leaves), and no soil to absorb nutrients from. As long as they’re grown right, they’re definitely healthy!

Microgreens grow for a little longer, uptake some nutrients from the soil, and have longer to develop complex chemicals like chlorophyll and convert sugars and energy into vitamins. Microgreens can have drastically higher vitamin and nutrient contents.

Do sprouts and microgreens have the same nutrition? 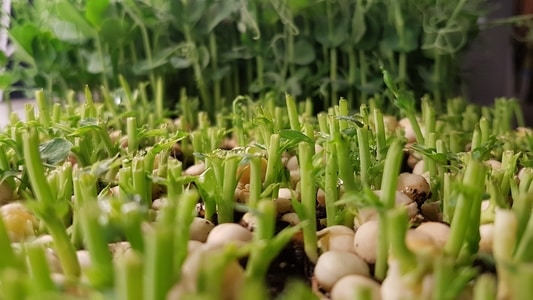 Both have some of the highest nutrient densities of any food. They are high in vitamins, minerals, proteins, enzymes, and other beneficial compounds.

However, microgreens have a bit of an edge, depending on how you define nutrition. Nutritional content usually refers to how much of the following nutrients categories a food contains:

Because microgreens have access to more energy (through longer growing and more light), and more access to minerals (through growing in soil or other growing medium), they’re generally able to synthesize more complex molecules many of which increase nutrition.

Sprouts on the other hand have to derive all their nutritional goodness from the initial seed.

Food Safety of sprouts vs microgreens

The following quote sums it up nicely:

“These results demonstrated that the microbial growth on sprouts were much faster than that on microgreens, which poses great risk of microbiological hazard to sprout-consumers. In contrast, microgreens seem to bear a relatively low food safety risk. “

When it comes to microgreens vs sprouts, the key points are:

Thanks for reading this far!