Why did my Sunflower Microgreen Sprout Three Leaves? 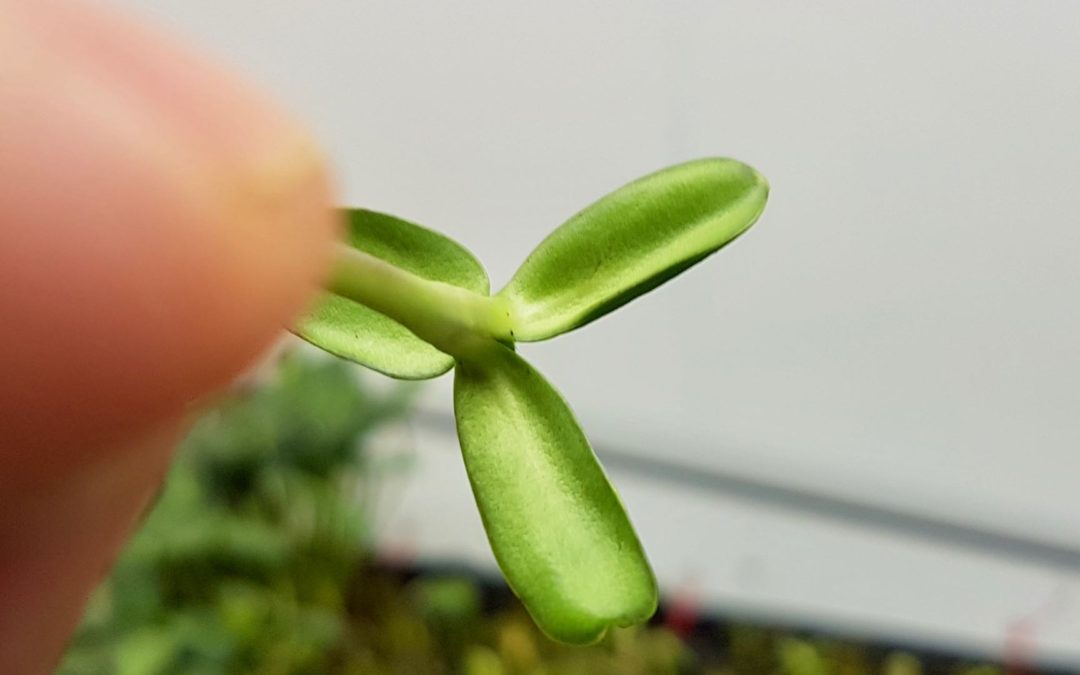 So this is pretty interesting!

I’ve been growing microgreens for a while. It could be that I’ve never looked closely enough, or these could be quite rare. The microgreen equivalent of a four-leaf clover.

Basically what you’re looking at is a mutation in the growth habit. Where and in what pattern the leaves and stems of the plant grow. It has something to do with genetics and hormones in the plant, and the symmetry of how the plant structures differentiate.

I’m no expert on any of this, but I can say one thing for sure:

And a quick disclaimer: I don’t really know anything about any of this! Whorled phyllotaxy, tri-cotyledons, and genetic mutation and expression are all topics in which I’m not particularly well-read, so take anything here with a grain of salt!

Contents hide
1 Are triploidic sunflower seedlings advantageous?
2 What is a tri-cotyledon or a three leafed cotyledon?
3 Division or true triploidy?
4 What causes it?
5 Is the first set of true leaves triploidic?
6 Other examples online
7 Conclusion

There’s some discussion online about whether or not this mutation is heritable, and if it’s beneficial and somehow could lead to higher yields.

As far as I can tell, it’s not stable from generation to generation, so we’re not going to be seeing mutant three-axis sunflowers soon. Or maybe my research skills are just sub-par.

What is a tri-cotyledon or a three leafed cotyledon? 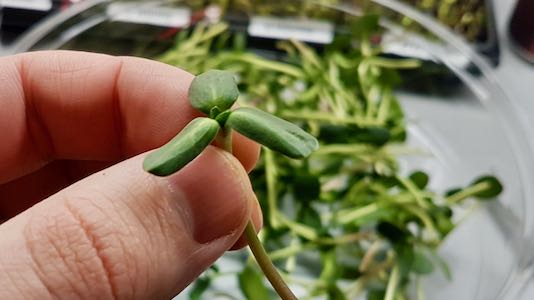 I know that’s not the most detailed explanation!

Normally sunflower microgreens sprout with two cotyledons (the initial leaves). The big difference here is that there are three. 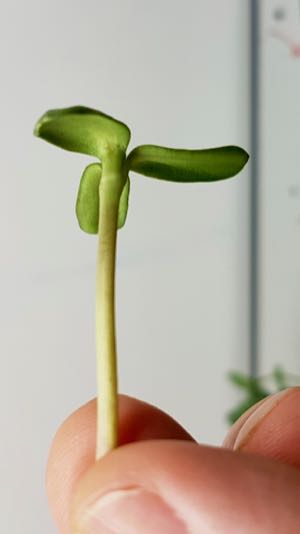 A cotyledon can end up with three parts in 2 different ways. Either by division or through genetics (true triploidy).

Division is where one of the cotyledons (the initial proto-leaves that unfurl from the seed) separates in two, resulting in one full cotyledon, and two halves for a total of three.

Looking at leaf proportions and the angles at which they are relative to each other I’m inclined to believe it’s true triploidy.

The cotyledons are roughly equal size and occur 120 degrees from each other (evenly spaced).

I would expect seedlings that have divided in two to have one cotyledon significantly larger and at a greater distance from the other two than they are to each other (because in reality they’re actually the same structure).

It’s all conjecture, but at least it’s a start!

As far as I can tell (and I’m no expert): basically it’s a mutation. Most mutations occur naturally, from natural genetic variation and recombination. But it can also be induced by radiation.

Information is really tough to track down on the causes and mechanisms involved. 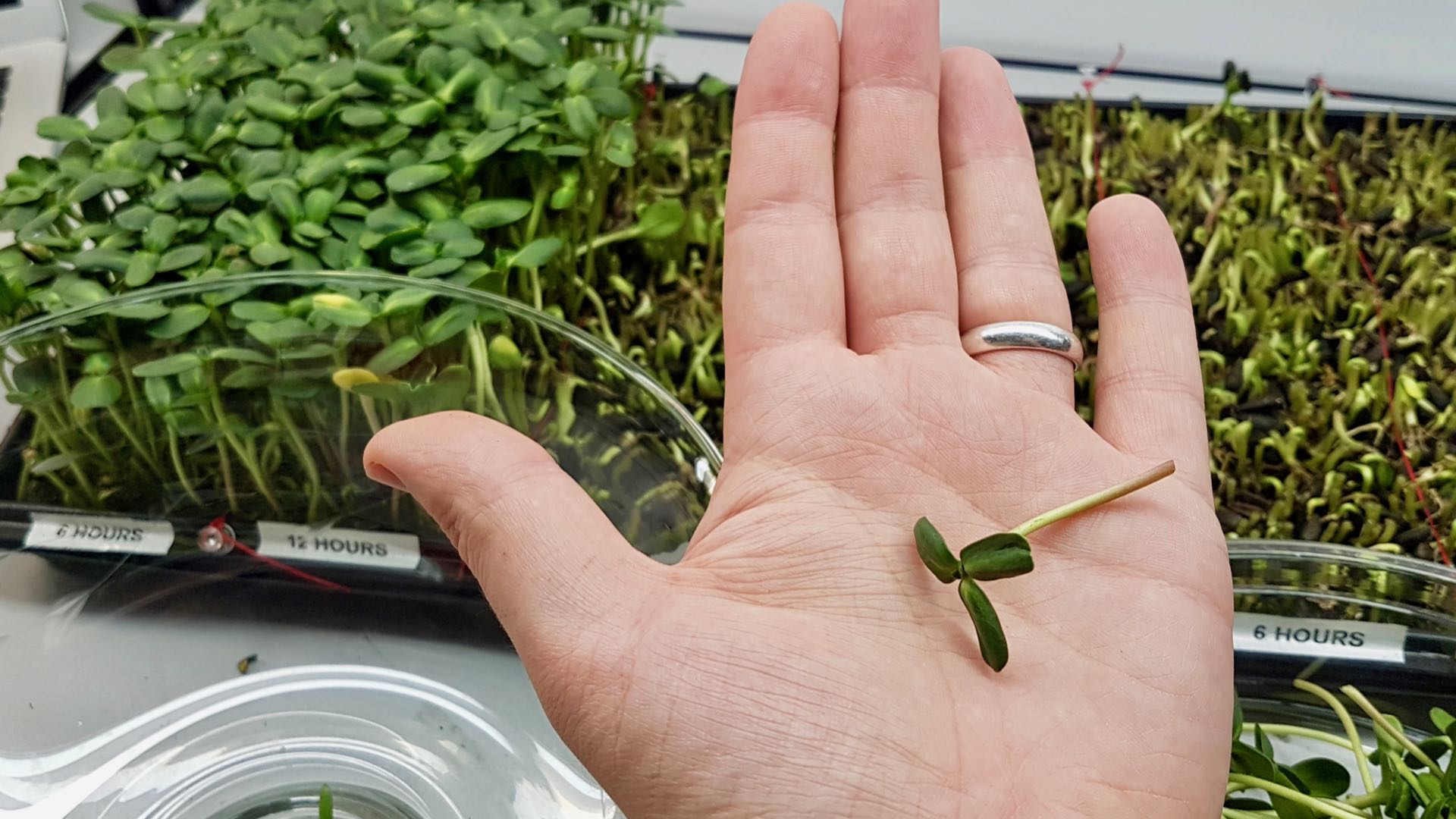 Is the first set of true leaves triploidic?

I was really curious if the plant would continue to grow with the three pole symmetry. Would it continue to have three leaves instead of the usual 2-leaf symmetry?

Unfortunately for this plant, I harvested it before I noticed it had three leaves.

So, I wasn’t able to grow it out and see how it developed.

If I find another one, I’ll keep it growing!

I dug through the internet to find other examples of this online, and there were a few!

This guy found a three leaf zucchini seedling. I wasn’t able to track down any further results once he grew it out, but still pretty cool! Zucchini normally has 2-leaf cotyledons/seedlings.

The same guy also found a tricotyledon in his tomatos! It kind of makes you wonder what he is feeding these things? All kidding aside, pretty interesting.

I came across a post by Eoine Keane on a horticultural forum where he observed it in an apple seedling.

Laura Arribas posted some cool photos including a tricotyledon Arabidopsis .

Maybe conclusion is the wrong word… because I don’t really have one.

So where do we go from here?

Well, I’m going to keep my eyes open for the next one. And try to grow it past the microgreen stage. It adds a bit of excitement to each tray. It’s quite the Easter egg hunt.

I’m also going to do more reading on the subject to unravel this mystery. I’ll update this article if I learn something I think you’d be interested in.

Microgreen researcg and articles as soon as they're published.