Home > Houseplants > Should you cut yellow leaves off Orchids?

Should you cut yellow leaves off Orchids? 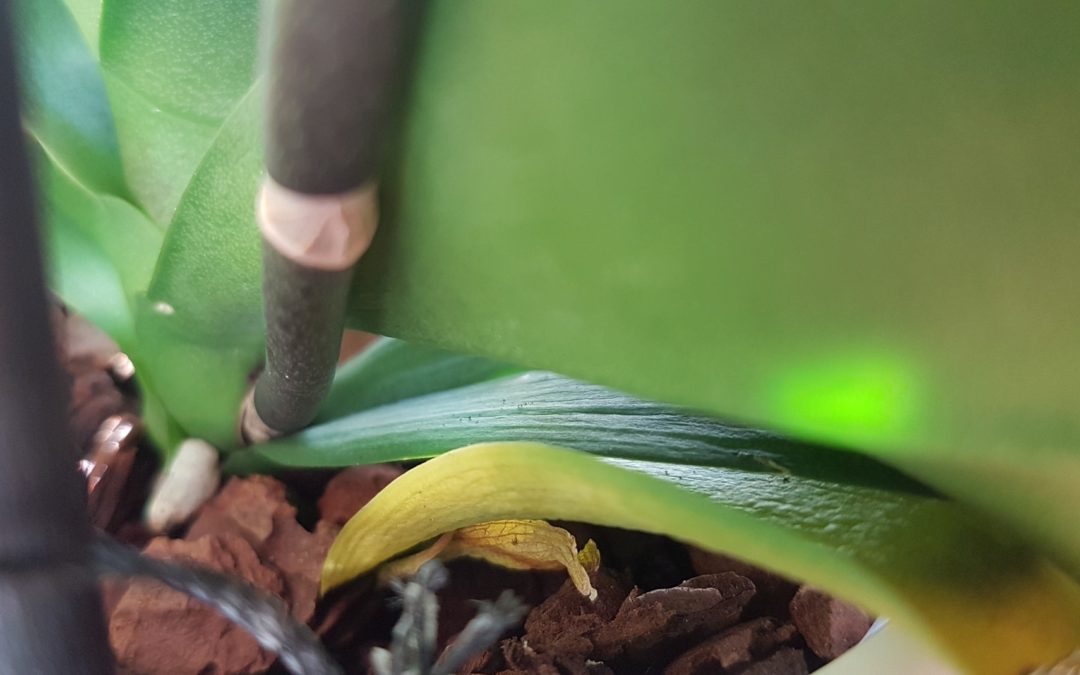 It depends on the cause of the yellowing. Orchids, will shed older leaves naturally, and they yellow before they’re dropped. The orchid will naturally seal the point where the leaf falls off, preventing an entry point for an infection. If you cut the yellow leaf before the orchid seals, it could allow pathogens a path into the orchid. Sunburn, heat or cold damage, and active infections are irreversible. In the case of an active infection it’s good to cut the yellow leaf off (look for black spongy parts of the leaf). Cutting off infected leaves can save your orchid. Reversible causes of yellowing include mild over-exposure to sun, slight over or under heating, and many nutrient deficiencies. If the yellowing can be reversed, there’s no need to cut off your leaf! Read on for a deeper discussion of these causes of yellowing.

Should you cut yellow leaves off Orchids? 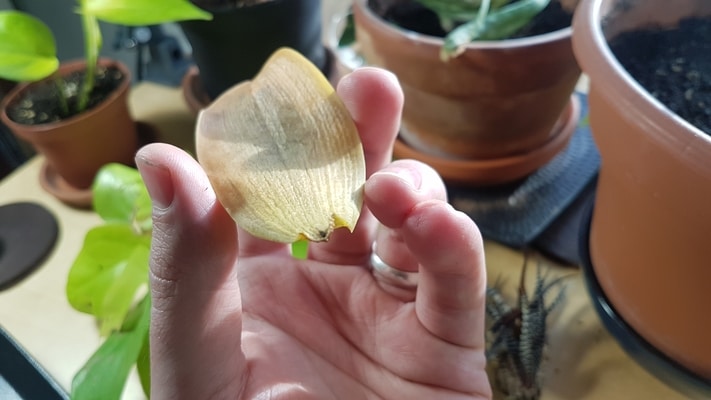 I prefer not to cut yellow leaves (unless due to Black rot) and there are a few important reasons. Lower leaves that are yellowing are likely being shed because they’re old and not functioning efficiently. When an orchid grows new leaves, it often sheds its oldest leaves.

Orchids seal leaves off as they shed them, preventing infections and a pathway for pathogens to enter the plant. If you cut into the live tissue near the base of a yellow leaf, you’re introducing an attack vector for infectious microorganisms.

Some people prefer to cut off yellow leaves, sometimes for show. In that case some people recommend adding  cinnamon powder to the open wound. I’ve never tried this, but there is some science to support the idea that cinnamon contains fungicidal compounds.

“The efficacy of combinations of cinnamon and clove oil showed good potential to inhibit growth of all fungi causing post-harvest decay of grapes. To control the growth of these fungi effectively by binary mixture of clove oil and cinnamon oil required higher ratios of cinnamon to clove oil. The optimum ratios of clove and cinnamon oil to control growth of these fungi were 3:7, 2:8 and 1:9 and their MIC was 400 mg/ ml.” – Udomlak Sukatta et al. 2008, (source)

Another cause of yellowing is leaf tip burn.

Cutting into leaf tip burn (looks like drying tips), is okay. It’s best not to cut into the living tissue, and to cut just inside the brown. This way you aren’t introducing any openings into the live tissue.

Can yellow leaves be fixed? 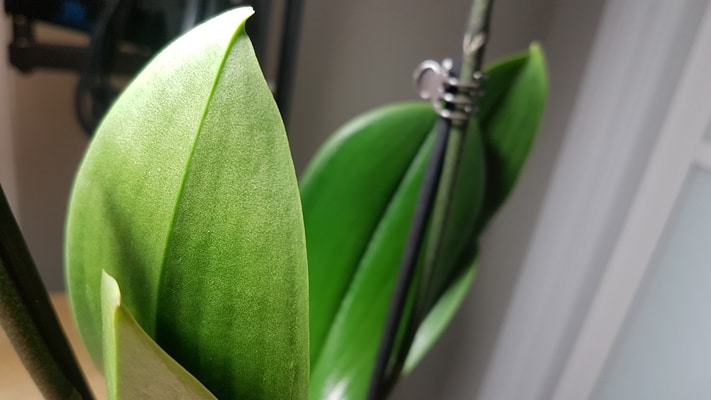 Orchids can bounce back from a lot, but not all yellowing leaves can be fixed.

Whether the leaves can be fixed or not, depends on the root cause of the yellowing.

The photo on the right shows a leaf that was starting to yellow because I gave it too much light. I put it in a new spot, and after a few months it looked like this:

Yellowing due to natural aging 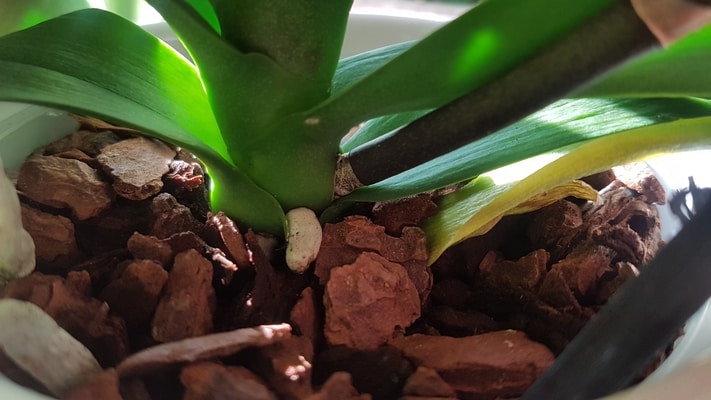 Old leaves that are naturally being shed can’t be fixed (not a problem). They all have a natural life-cycle and shed their oldest leaves eventually. Orchids do this to regenerate themselves, and make sure they’re not expending energy using old worn-out leaves.

Orchids don’t want to invest energy into maintaining poorly functioning leaves. They have internal biochemical mechanisms that signal when a leaf is no longer performing optimally.

Monopodial orchids (like phalaenopsis and vandas) will shed their bottom leaves. It’s normal for these orchids to shed leaves that are 4 to 5 years old. Vandas tend to keep leaves longer

Yellowing due to environmental or nutrient factors

Leaves that aren’t old, and are yellowing and being shed are likely due to an imbalance in the orchid’s needs and the environment, or a deficiency within the orchid. These yellowing leaves can likely be fixed, but not always.

If you burn leaves they’re more likely to be shed, and there often isn’t enough time to take corrective action. Burning refers to relatively quick damage done by fertilizer or intense light.

If younger leaves are pale, it’s a deficiency in chlorophyll. Chlorophyll production in new leaves is often low because non-mobile nutrients aren’t available in the new growth. Orchids can mobilize certain nutrients from older parts of the orchid to new growth when there’s a shortage. But not all nutrients are mobile.

Iron is not mobile once inside the orchid, it becomes fixed in the tissue. If an orchid is iron deficient when a leaf forms, the leaf will yellow (chlorosis). The yellowing is a lack of chlorophyll, while chlorophyll doesn’t contain iron, iron is required in the synthesis.

This type of yellowing likely can’t be fixed in the existing leave. But iron deficiencies are often caused by pH issues in the growing medium. Double check the pH of your water and nutrient solution, and the runoff from your growing medium.

If the rot is on a leaf, cut the leaf off to prevent the spread. Use a sterile knife or scissors, and dispose of the severed vegetation away from your orchids.

The rotten tissue from Black rot will have squishy texture. It’s caused by either of two fungi, Pythium ultimum and/or Phytophthora cactorum. Black rot is well adapted to attack a large range of orchids, so don’t rule it out unless you have good reason to.

If leaves sustain extensive damage, the orchid will likely grow smaller leaves the next time it enters vegetative growth. Once it has enough leaves to sustain itself it will likely drop the damaged leaves.

If you notice black or brown spots spreading, it is usually a good idea to cut that part off if you suspect it’s caused by an infection. Better safe than sorry.

Yellow leaves with black spots due to Black rot can not be fixed, your orchid’s survival is at stake. It’s gruesome, but you’ll need some maritime grit: it’s time to amputate.

Some orchids are deciduous 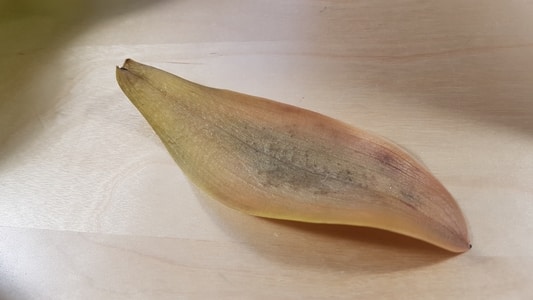 Orchids can go into defence mode and shed leaves. This draws nutrients away from extremities and towards main growth focus, the core or the crown. This can happen for example if theres extensive root loss. Nutrient deficiencies can then cause yellowing. This can be from not enough nutrients, or not enough water.

Nitrogen and Magnesium are mobile within the orchid. So the orchid can draw nutrients towards the active growth part.

Some yellowing can be reversed, and it all depends on the cause of the yellowing. You might have to do a little bit more reading, but you’ll figure it out!

So, unless you think there’s something serious going on, don’t worry too much. Have a cup of coffee and get back to work!